Gosh, it's been over a month since I blogged.  We have been away to Rhodes on holiday but I can only blame a weeks absence on that.  I have been working madly but I have also been doing some piecing for myself.  With my ankle healing slowly, I have not been able to run early in the mornings so I have been getting into my studio for 7.30am and using the hour and a half before 9am, when I start work, to sew for myself.  I have been finishing UFO's and also making new quilts.

This is a quilt I finished yesterday.  I used some of my repro 1930's prints.  I love their cheerfulness.  I had seen this block in pattern books made using the foundation pieced method.  I don't like foundation piecing because I hate removing all the papers afterwards and if it is pieced over vilene, I feel the blocks are too thick.  So I pieced it using my 30 degree wedge ruler and then trimmed the block into a hexagon using the 'Marti Michel Hexagon Ruler'. A tad wasteful but a compromise I was prepared to make to get the block I wanted.  I appliqued a circle in the centre of the blocks instead of the traditional hexagon and added circles round the outside.  The blocks are joined with lots on inset seams so it was slow going but I have to admit I am pleased with the result. It is not a large quilt, only 56" x 60" but was large enough with all those inset seams.  I put it on the Gammill early this morning and quilted it with lots of concentric circles to give an impression of spinning. 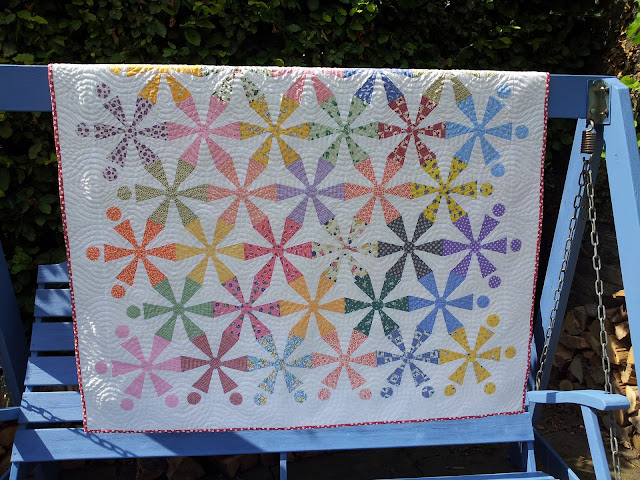 I used a red spotty fabric for the binding and a pale yellow backing.

I could get quite used to making smaller quilts!!