I've just finished piecing my scrappy trip blocks and started to play with them on my design wall.

I am sure this is how I will sew the blocks together but..... 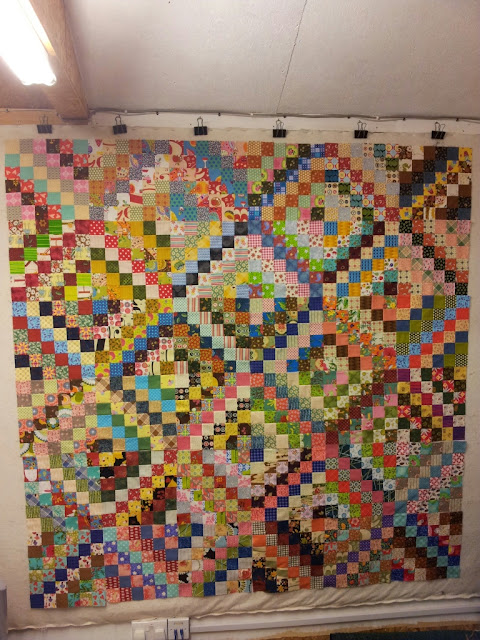 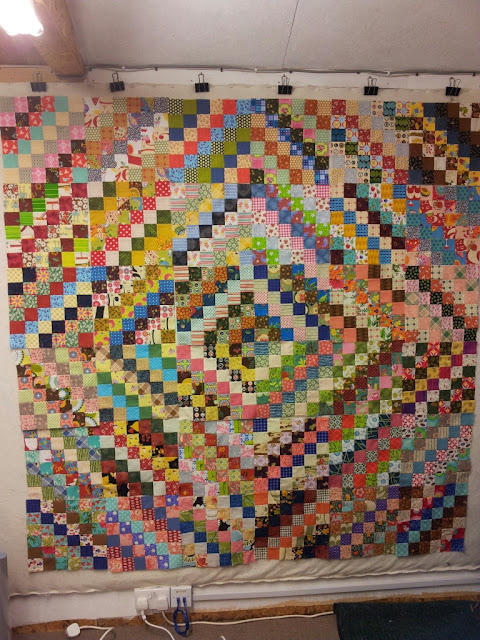 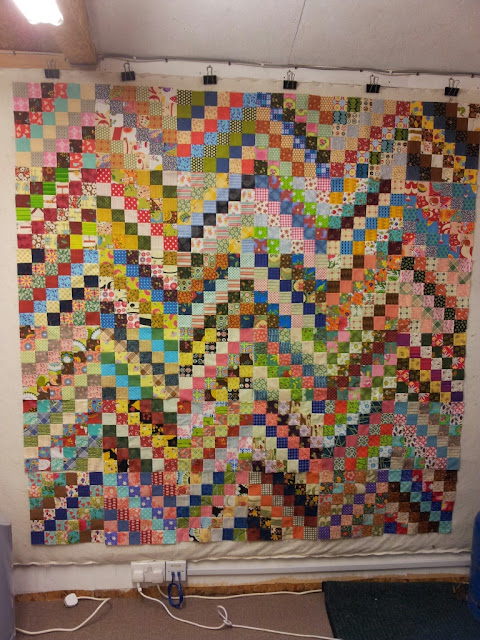 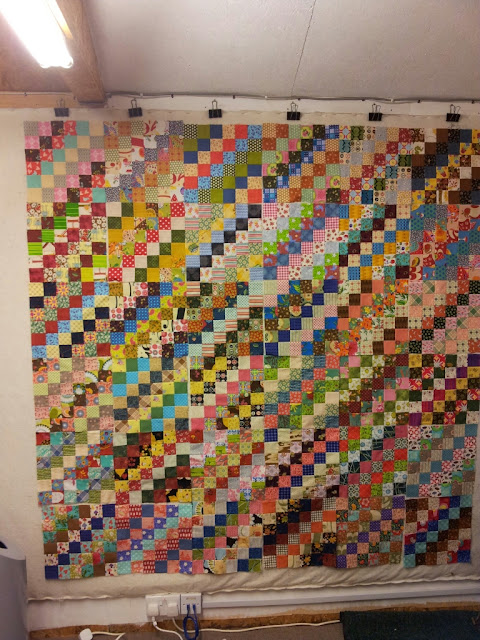 I may just have to make another set of blocks and carry on playing!

Are you sitting comfortably?

When I was in my early 20's I was knocked off my bike by a car.  Since then I have struggled with a bad back.  I try not to let it stop me doing the things I want to do, but there are some days that are more painful than others. Today is one such day.  The thing that causes me the most pain is long periods of sitting.  We had a snowy weekend so I spent 2 very happy days at my sewing machine piecing for myself - bad move! (literally!!!)  I can hardly walk today.  The reason I am telling you this is not for sympathy (although a little sympathy is always nice!) but to ask if any of you sewers use either a saddle stool or a kneeling stool whilst using your sewing machines.  They are both supposed to be good for people with bad backs and sitting at a normal desk I can see how they could ease back pain but I'm not sure how they would work when you have to have one leg out in front to operate the foot pedal.  I would be grateful if any of you have had experience of these stools, you would drop me a comment to let me know what you think. 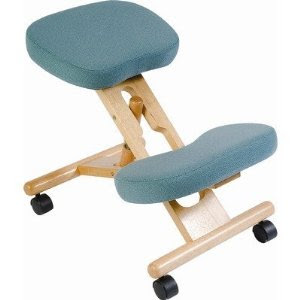 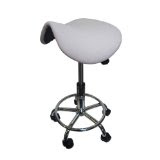 I'm not going to post a picture of me walking round holding a hot wheat bag to the base of my spine and lowering myself very gingerly on and off the sofa - good job you can't hear my grunts and groans too!!!  Ha Ha.. At least I stand up to use the gammill so working is fine.

Now for today's finished quilts.  This is Kathy's quilt and she made it for her son (I think) and she wanted a triangle pattern so I used 'Triangle meander' in a pale grey thread.

This quilt was made by Walter and it is going out to Australia as a gift at the end of March.  All those lovely bright Kaffe Fasset fabrics will look lovely under the Australian sun 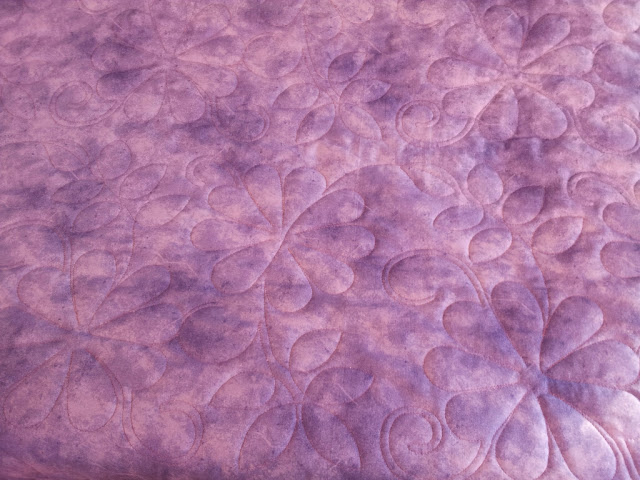 The fabric is so busy that it is hard to see the quilting on the front but you can see it better on the back. I stitched 'retro flowers' on it in a pale lavender thread.

Happy new year everyone.  I was pondering on the issue of 'new years resolutions' and whether I was going to make any. Sometimes I think that by making them, we set ourselves up to fail because of the pressure of trying to keep them.  I have known for ages that I am a good starter and a poor finisher when it comes to quilting (one look at my pile of UFO's will vouch for that!!!) I see a pattern I want to make and start off with lots of enthusiasm then get sidetracked by another pattern or just pressure of work, and I go off the boil and lose interest. I thought I may post pictures of all my UFO's and then say I would complete them all before starting something new......then I got real!! It was never going to happen.

What I have done is go through all of them and those that I know I will never finish because for one reason or another I just never fell in love with them, I will give away.  I realised that I was very much of the 'Mastermind' school of quilting ie. I've started so I'll finish!!! and UFO's would just hang around my studio making me feel guilty for not finishing them. I'm moving on from that .....

One or two I have decided that I do still like and will TRY and finish them this year.  I will post them as soon as they are done.

Now on to some customer quilts finished since the new year....

This first one is for Jenny.  She was given the top, wadding and backing by another quilter (who probably, like me, had gone off the boil!!) so she decided to finish it as a sofa throw.  It is rather like a braid quilt and I quilted it with an allover pattern called 'Asian leaves. 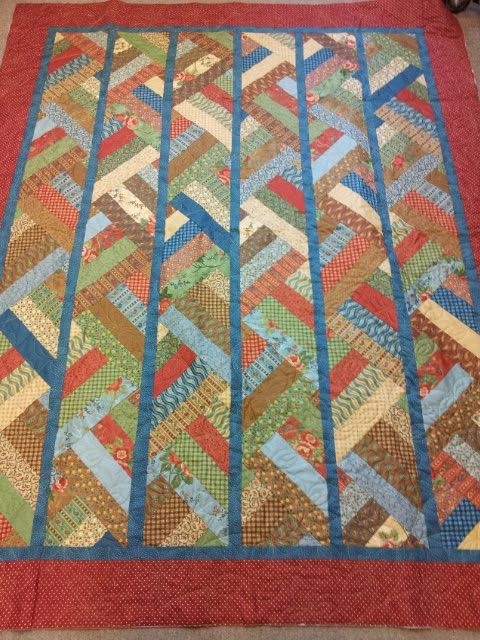 This quilt was made by Jean and although the block is a simple square, all the white areas really show up the quilting.  I did 'pretty posies' by Tammy Finkler on it and as Jean wanted a blue thread, it really shows the qulting nicely. 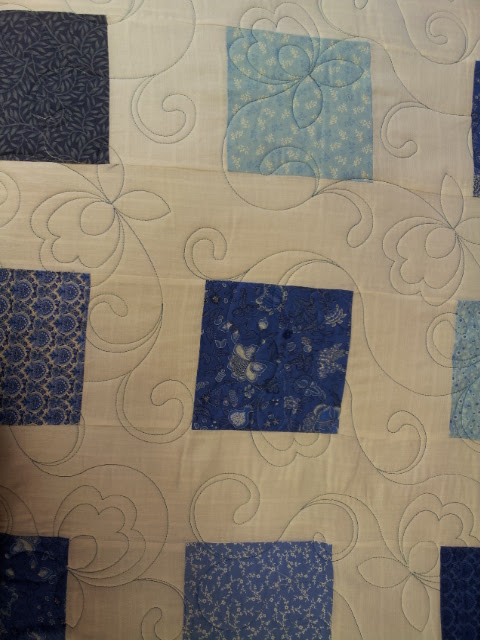 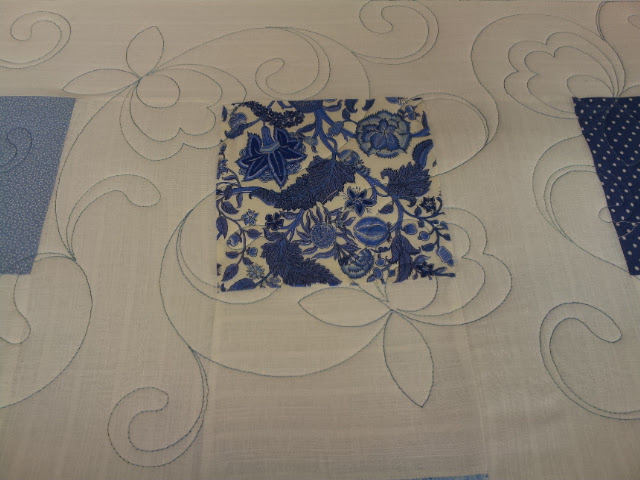 This was Julie's quilt and she chose 'circleplay' because she had used loads of dotty fabrics - Mmm, I love dotty fabrics! 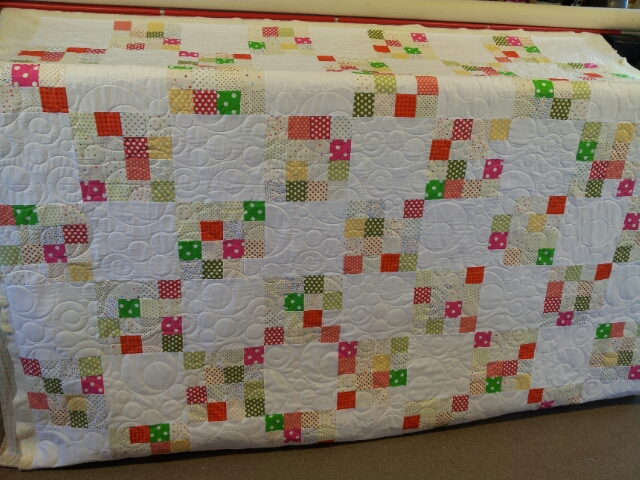 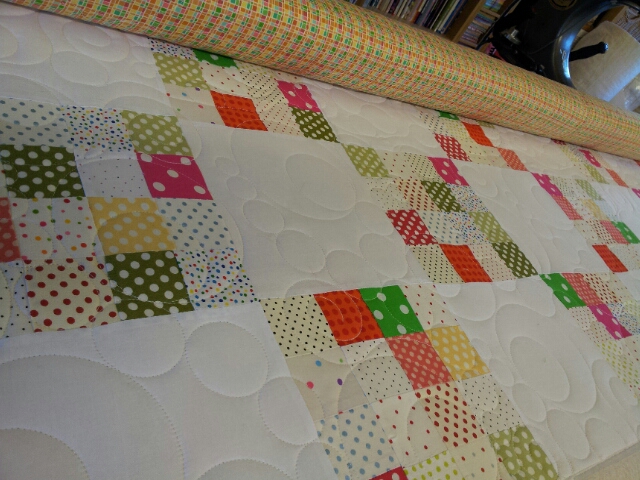 Anna made this quilt and I stitched a daisy pattern called 'flowers for Lynda' in a yellow thread which shows up nicely on the back. 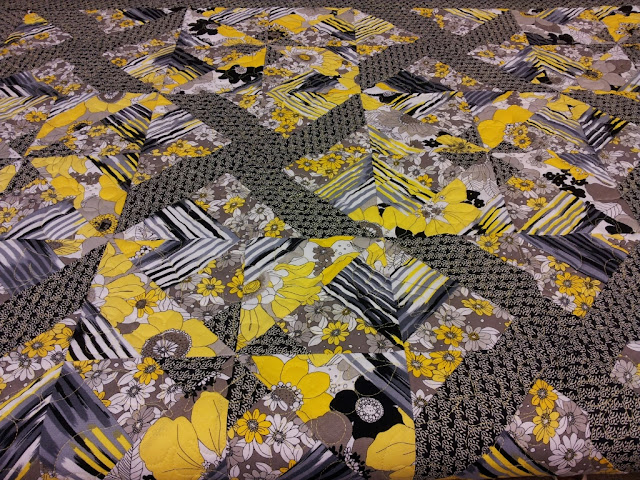 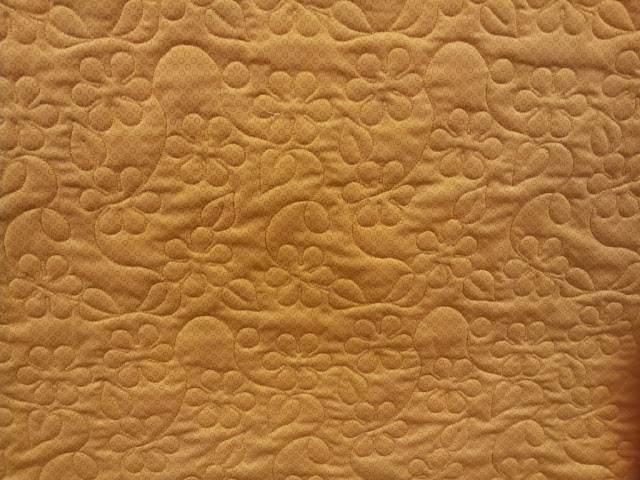 Christine made this quilt and I quilted a simpler version of 'pretty posies'. 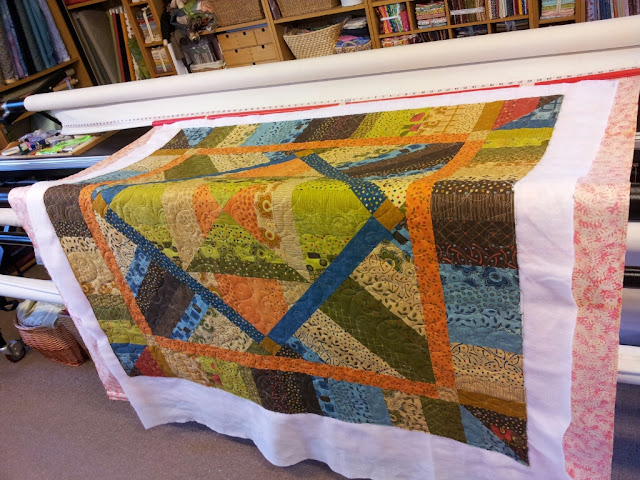 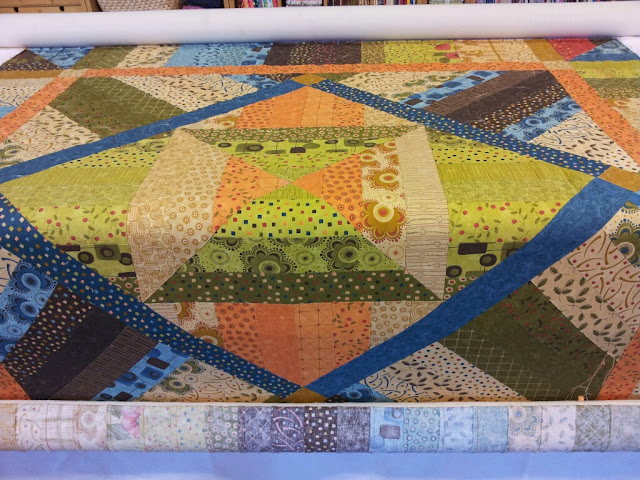 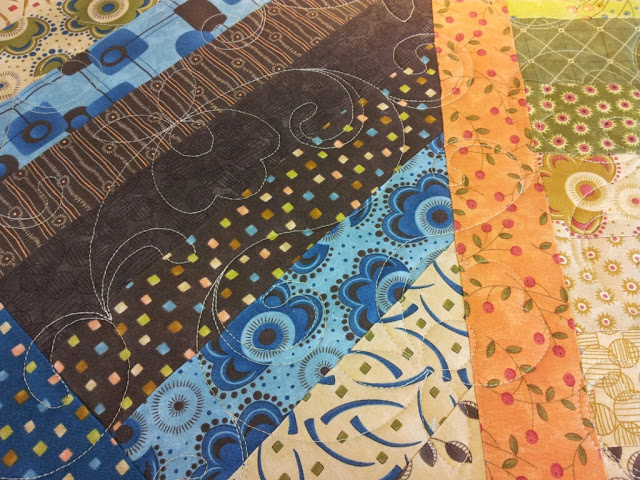 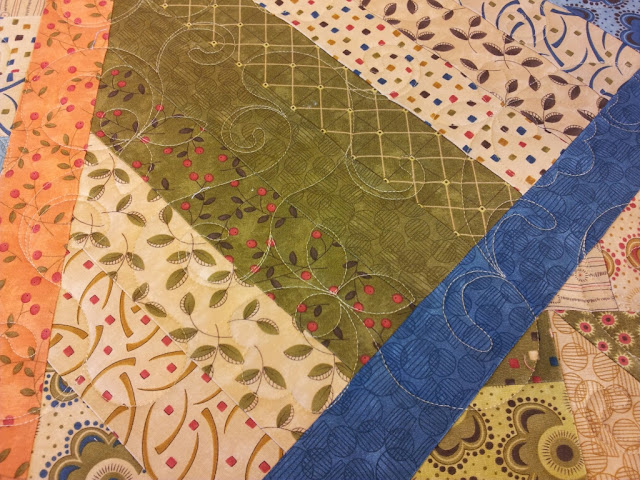 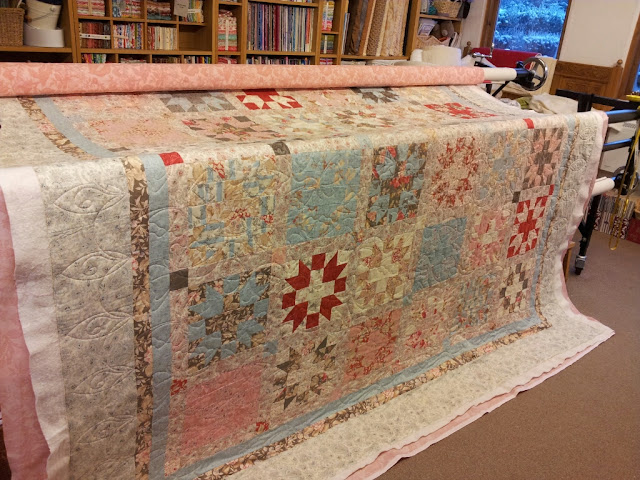 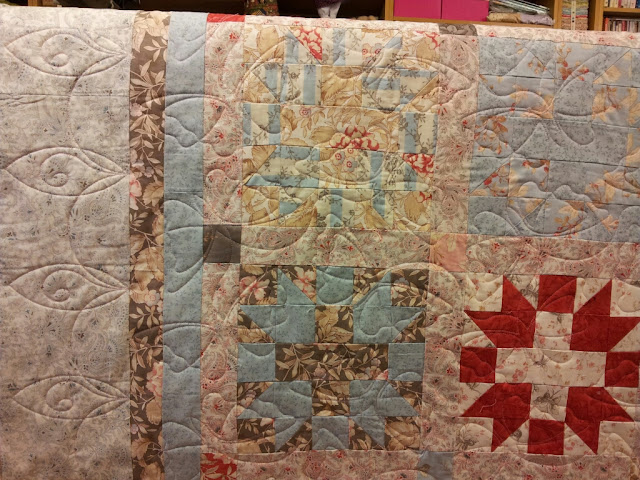 Philippa also made this quilt.  She sells her quilts on her website http://www.demerarasquilts.co.uk 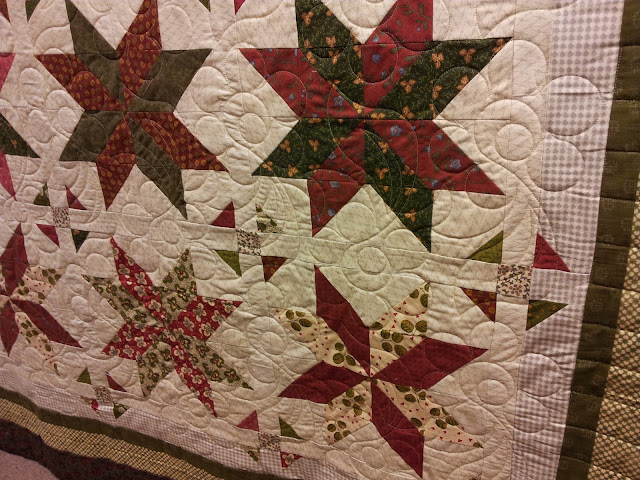 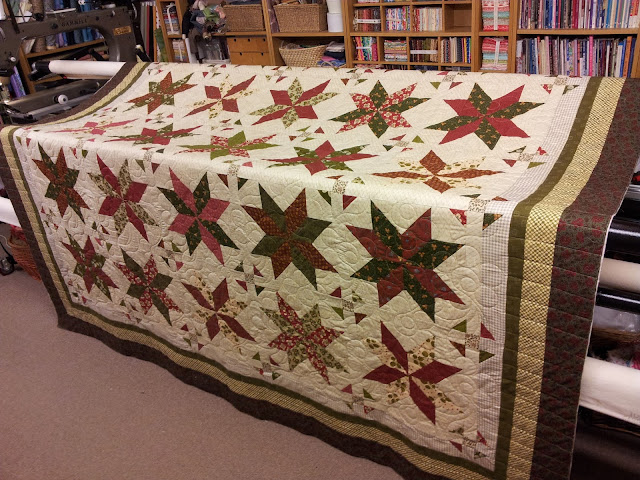 I have done some piecing since the new year.  I recently got some Marti Michell templates for the 'drunkards path' block and decided to use some of my California girl fabric (with a little 'Ruby' thrown in for good measure).  Once I had started it, I decided that the blocks were too big - 6 inches (24 inch blocks when finished) 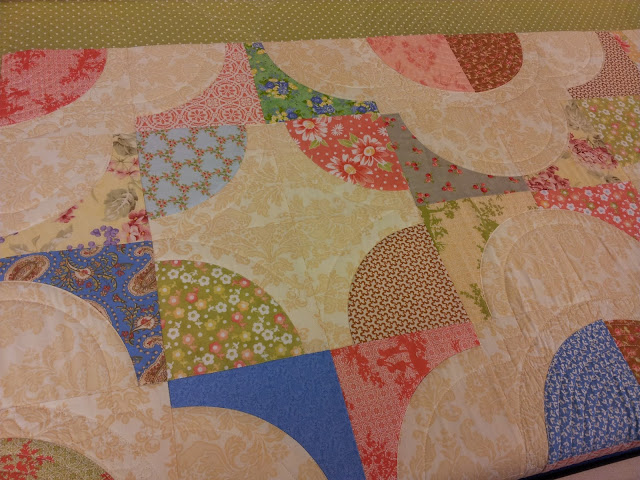 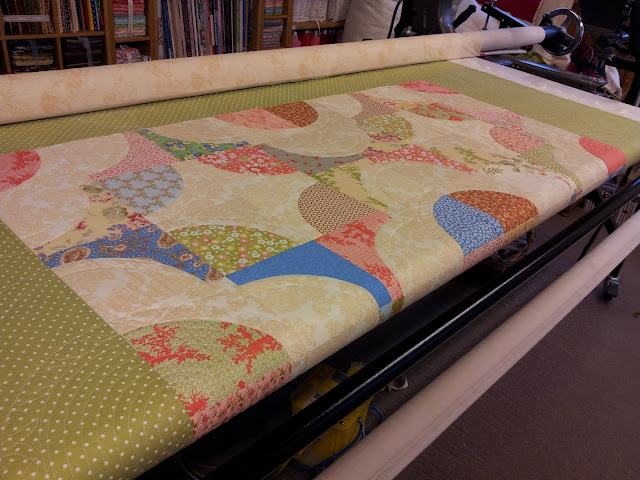 I decided to call it a day when I had 6 blocks.  I added borders, and once I have quilted it I will make another one using a smaller block.  I started to quilt it but have taken if off the machine so I can do some work.  I will reload it once I have some time and will post pictures once it is finished.

I started to piece a new quilt using some 'Flirt' fabric by Sandy Gervais.  I bought this by mistake!! - I'm not usually into heart fabrics but decided to use it nonetheless.  I suppose it is quite relevant as Valentines day is approaching.

I found this great website - http://www.patchpieces.com/files/flyinggeese.pdf - that shows you how to make the flying geese with no waste.  I chose to make a 12 inch block.  I know this method of making flying geese is not new but it was good to know the maths to make a block any size you want. 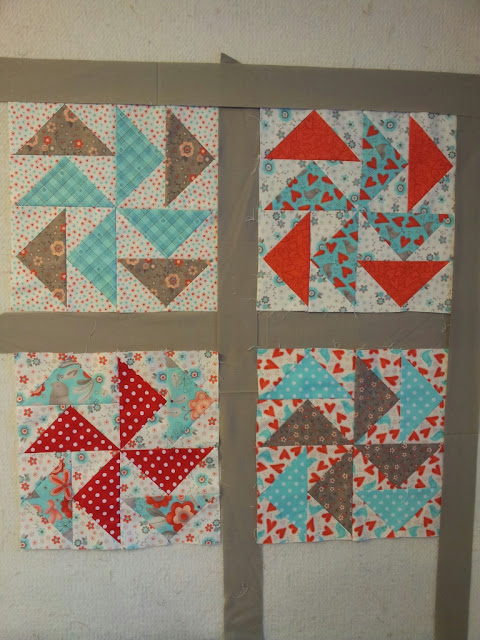 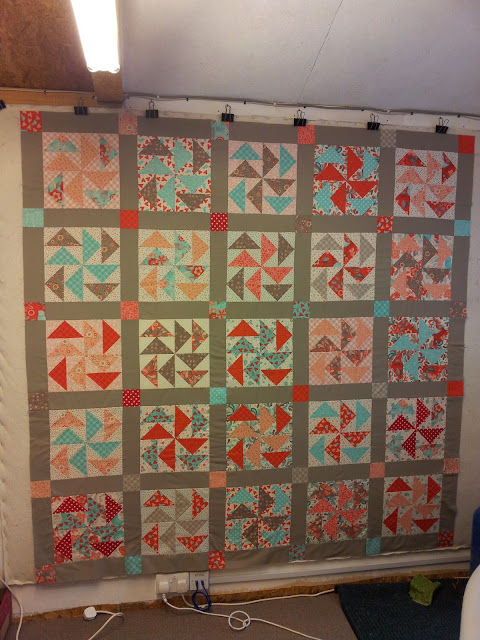 I am just deciding whether to leave it as it is or add a plain 'bella stone' border - what do you think? 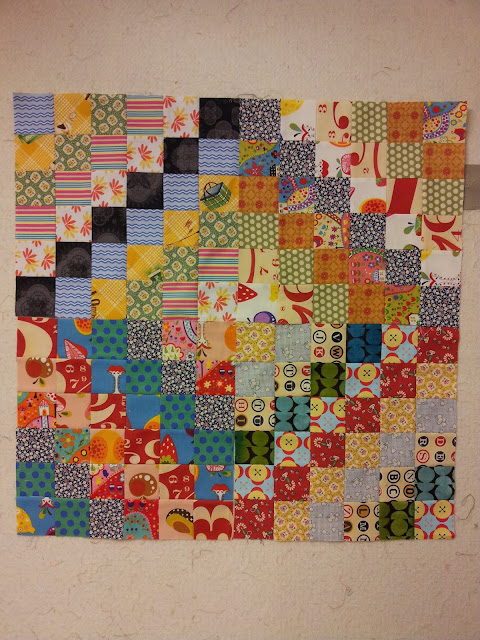 I've got lots of strips cut out so will continue to make blocks.

And finally - We've had snow!! 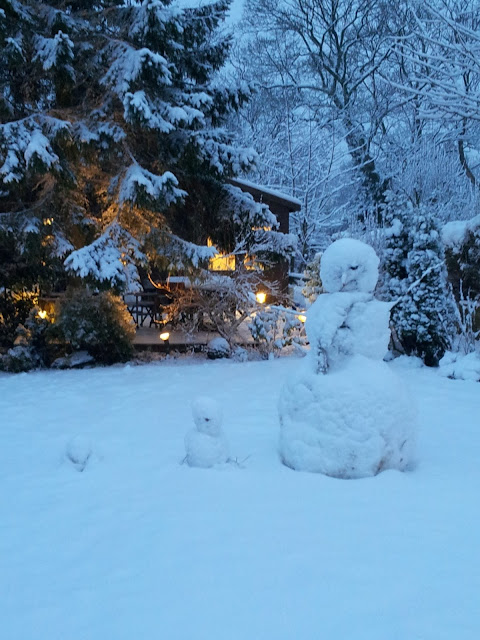 The view to my studio this morning as I set out to work!  It wasn't even properly light but I thought it looked pretty with the garden lights on. The snowman, his baby and dog got a fresh covering! 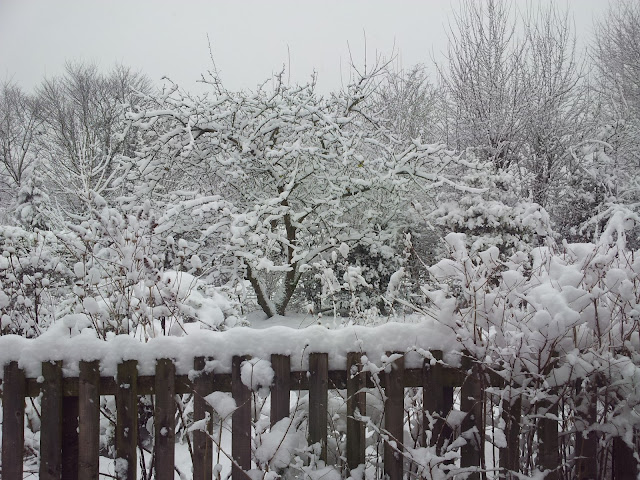 The view out of my studio window - so pretty.

Hope you are all home, safe and warm with some quilty projects on the go.